From
Jump to navigation Jump to search 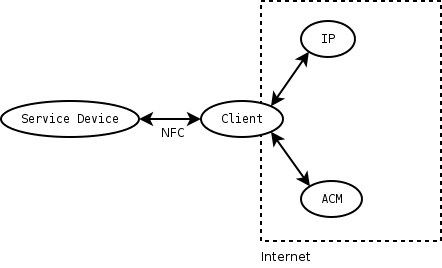 The proposed high-level protocol we use is devided into 3 phases: In the first phase (Low-Level Connectivity) the client discovers all the available services offered by services devices (phase 1.1) and builds a cryptographically secured connection to the service device from which it will use a service (phase 1.2). We will use this phase also to verify the identity of the service device so that the user can be confident that he uses the assumed service and not the one of a malicious third party.

The third phase is the phase in which the actual use of the service occurs. All three phases are described below in detail:

We should define a service discovery mechanism that is completely IP-based (most probably: use Bonjour for that) and completely agnostic of the lower layers. Then there should also be the possibility to use mechanisms that are specific to the respective lower layer, e.g. to speed up discovery and most importantly to optimize the operation (there's no sense in establishing a full IP connection with ZeroConf etc. when it can be determined at the Bluetooth layer that the remote side won't talk with us anyways). These lower layer mechanisms would have to be defined separately for each NFC technology. In the case of Bluetooth that would most probably be based on SDP.

All data of phase 1.1 may be cached for later use (other services which are already known from the same or other service devices...). 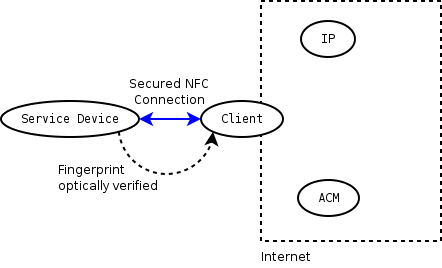 After we know to which service on which device we want to talk to, a connection has to be built. It seems logical to start with encryption right here (using e.g. TLS), so that all information potentially leaked to malicious third parties is minimized. It's also a good point to verify that the other end point to which the client talks to is the actual service device, so that any kind of man-in-the-middle attack is prevented. This can be done by using some public-key protocol, so that the client can present the fingerprint (encoded as some colored symbols? Is there some standard to do this?) of the received key used by the service device to its user, who can compare it to some physical label on the service device. 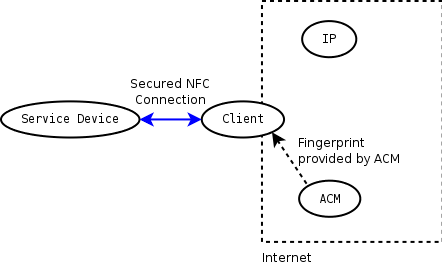 Other alternatives seemed possible to verify the fingerprint. E.g. the ACM could provide this information (in phase 2.2), so that the authenticity of the service device could be verified by the client later on, instead of asking the user to compare some colored symbols. But this would mean that the user would have to trust the ACM, and as the service device itself provides the information which ACM to use, this could also be a compromised service (provided by e.g. an attacker who tries to MitM-attack the connection between client and actual service device), so we consider this as bad design. Note that the fingerprint can't be provided by the IP as it doesn't necessarily know about ACM or even service device (as they may not have an identity in the sense of an IP).

In cases where it's not that important to ensure that the client talks to the right service device (it may be important in a photo print shop where the user doesn't want to give his photos to somebody else with e.g. much higher prices, but unimportant when accessing a beamer), one could think of a third option "unimportant" besides "matches" and "doesn't match" regarding the fingerprint (with "match" cached for future use and "unimportant" only valid for one use or sth. like that).

So from here on, the client can be confident that all data he transmits can be read only by the service device he wants to use. We now have to ensure that the service device can be sure to be used by (i.e. receive commands from) a client who is authorized to do so. This is done by phase 2: 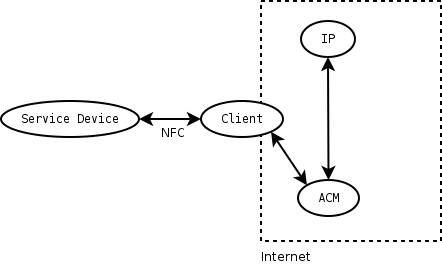 One could think of methods for minimizing the communication efforts of the client. Besides caching of identity assertions (within the clients cache), the idea could be to let the ACM identify the client itself (with the help of an IP), so that it's not necessary for the client to directly communicate to the IP. But this would have some disadvantages like leakage of information (used service, ...) to the IP or the difficulty of transmitting the needed credentials through the ACM, so we don't consider this as a good design choice.

Both authentication and authorization messages between all four parties are transmitted using (signed) SAML assertions and protocols, as follows:

Within this session, an authorized usage session (or multiple?) may be opened. This involves communication client<->service device and client<->Access Control Manager

Phases 2 and 3 need a common base communications protocol. It seems logical to use XML for all protocol messages. One question still remains: How do we transfer our XML messages over the IP network? The common approach apparently is to use SOAP. Although SOAP theoretically can be used over any transport mostly no one ever uses anything else than SOAP over HTTP. This approach doesn't fit our environment:

One candidate for an appropriate base protocol to wrap the XML messages up in would be SCTP, the Stream Control Transmission Protocol (RFC 2960). Another candidate would be BEEP (RFC 3080). A third choice would be XMPP (RFC 3920). (See SPAN Web Ressources)

So from a purely rational standpoint BEEP (over TCP) seems to be the best choice:

(And of course: BEEP has the superior abbreviation compared with SCTP.)