Note: To make it easier for native German speakers to understand this document, some translations have been added to the English part.

Mixmaster, Mixminion and Tor are tools to achieve anonymity or pseudonymity, but exactly what does that mean? Anonymity means that you can do something without enabling other peoples to get hold of your identity. The roles in the scenario are fixed. It is always Alice that wants to communicate with Bob. Usually Alice is human and Bob is either a computer (e.g. webserver) or human as well. Eve is trying to eavesdrop (belauschen) on them. To be more precise, Eve wants to find out that Alice and Bob are communicating with each other.

In addition to anonmity, pseudonymity also requires that you can assume a fictitious name and be recognized by that name without anybody knowing your real identity. This can be a very important aspect when it comes anonymous communication. Both partners may want to remain anonymous while making sure they are not talking to an impostor (Betrüger/Hochstapler).

Fortunately, pseudonymity can easily be achieved once you have made sure you are anonymous. Just digitally sign everything and everyone will know it really comes from you, without knowing who you really are. As a result, we will only talk about achieving anonymity, knowing that it will also give us pseudonymity.

In the introduction I said that Alice can communicate without Eve knowing who Alice is communicating with. But how much is Eve willing to invest in order to find that out? This is an important question that determines how much Alice has to spend to remain anonymous. Imagine Eve is simply Alice's nosy neighbour. In that case it is rather simple for Alice to ensure Eve does not know she is talking to Bob. However, if Eve is a secret service willing to spend millions of Euros/Dollars on spying, things get a lot more difficult.

So whenever it is stated that you remain anonymous, keep in mind what assumptions have been made about Eve!

The purpose of low latency anonymization is to make it possible to anonymously use services that require low latencies in order to be usable. Such services include Web browsing, DNS lookups or instant messaging. However, the low latency of the connection allows certain attacks that could be prevented with higher latency systems. In this context, high latency means that the data needs several hours to reach its destination while low latency systems need a fraction of a second or a few seconds.

The trivial solution is to send Alice's requests through an anonymizing proxy. The proxy would remove all information that might link the data to the sender and forward the message to Bob. A website where such a service is offered is www.anonymizer.com. Using a proxy ensures that Bob does not know Alice's identity. The concept is easy to understand and it obviously works for the mentionned purpose. 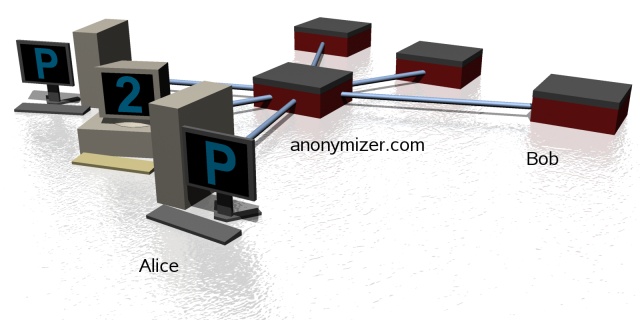 Since Alice cannot trust in the honesty of the proxy operator, how is she supposed to remain anonymous, what can she rely on? One thing Alice can rely on is that, most likely, independent proxy operators will not cooperate with each other to reveal her identity. In addition to that, it is almost certain that among all proxy operators there is at least one that is honest and does not spy on her.

How can Alice take advantage of that? Assume she has a choice of three proxies X1, X2 and X3. Why not use proxy X1 to connect to proxy X2, and use that connection to connect to proxy X3? If done right, it would mean that only proxy X1 knows Alice and only proxy X3 knows Bob. In addition to that, the operator of proxy X2 would be needed to be able to link both connections to each other since X1 and X3 do not know each other.

This approach would also solve another problem that has not yet been addressed. The proxy operator may not want to spy on Alice, but a national court or intelligence service may have forced him to do so and to not tell Alice about it. If all three proxies are located in different countries it becomes much harder for a certain intelligence service to do that.

While one may think that this threat is rather theoretical, the operators of JAP have been forced to log certain requests by German law enforcers. One factor that made this rather easy is that at this time, all JAP proxies were located in Germany. Even though a court eventually ruled that no data needs to be given out, this case demonstrates the importance of spreading a proxy network over many countries.

"Tor" is short for The Onion Router. It works as a SOCKS proxy for other applications allows them to anomyously communicate with low latency. It is not a peer to peer system since it relies on client server architecture. Yet it is decentral, so the loss of one server will not make the network break down. 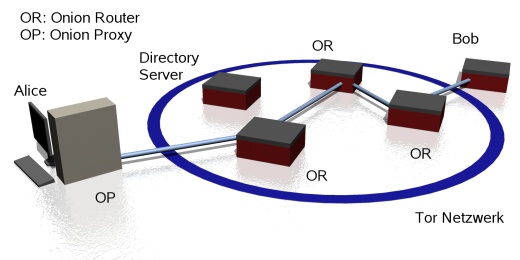 The basic building block of the Tor network are the ORs, the onion routers. The chain of ORs that connects Alice and Bob are called a circuit. Alice runs a special client software, the OP (onion proxy), that provides the SOCKS proxy for her applications. The directory servers are used to keep track of the ORs. That is necessary, because anyone can operate an OR and join the network. Obviously, the Tor network contains more than just three ORs and one directory server.

While the above picture looks very simple, there are a number of problems that need to be addressed:

- Can Alice trust the directory server?

- How do you build a circuit without compromising your anonymity?

- Alice needs to make sure only the last server knows will see the message for Bob (that message may be encrypted, but that is irrelevant).

- ORs should only know their successor (Nachfolger) and predecessor (Vorgänger).

- What happens if Eve operates some of the ORs?

The two things that are crucial for building a circuit are Diffie-Hellman key exchange (DHKE, deutsch) and the public key of the OR that the OP received from the directory server. The purpose of the DHKE is to allow "two parties that have no prior knowledge of each other to jointly establish a shared secret key over an insecure communications channel. This key can then be used to encrypt subsequent communications using a symmetric key cipher." (Wikipedia)

The only problem is that DHKE is vulnerable (angreifbar) to man-in-the-middle attacks. You establish a shared secret key with somebody, but is that somebody really the OR that you wanted to connect to? This is where the public key comes into play. Since only the real OR knows the corresponding secret key, it can prove its identity.

So what do we have now? We have an encrypted connection to onion router X1, and we have verified that this really is X1 and not an impostor (Betrüger). This connection to X1 can now be used to connect to X2. We simply tell X1 to connect to X2, making sure that X2 never knows our IP address. We could continue until we have a circuit of hundreds of ORs. But as we will see later that would not significantly increase the level of anonymity. Unless configured otherwise, Tor uses three ORs for a connection.

Since there are significantly more users of Tor than ORs, every OR is part of multiple circuits. Because the OR needs to know where it should send a unit of data (called cell in Tor lingo), every cell must contain some kind of routing information that tells the OR what to do without revealing the structure of the circuit! This has been solved by so called circIDs, that are assigned to all cells. Onion router X1 for example associates the circIDs 78 and 42 with each other. Whenever it receives a cell with circID 78 it will change the circID to 42 and forward the cell to X2. X2 will then switch the circID to 17 and send the cell to X3. X3 knows that when it receives a cell with circID 17 it must pass the data on to Bob.

That way the cell never contains the entire routing information, let alone final destination. Additionally, once the connection is closed the ORs forget about the circIDs for that connection. That makes it impossible to backtrace (zurückverfolgen) the connection once it is closed.

When Alice wants to send a cell over her circuit, she first encrypts it with the secret key that she shares with the last OR in the circuit, Xn. She takes the result and encrypts it for Xn-1, continuing until she encrypts the cell for the first OR in her circuit. The resulting cell looks like this:

The onion-like structure of the message is what gave onion routing its name. As the cell passes through the circuit, each OR removes one layer of encryption. Only the last OR gets to see the final message, all the previous one just saw some encrypted message. But why not just encrypt it for X3? That way X1 and X2 would not have to perform the computionally expensive decryption. The reason is that by constantly mangling the packet it gets harder to trace because they always look different when they leave an OR.

Bob's reply reaches Alice in a similar way. Every OR encrypts the cell with the key it shares with Alice, producing a cell that looks like this:

The reason for the encryption at each hop is the same as above. Alice can remove all the encryption layers from the message since she knows all the keys. 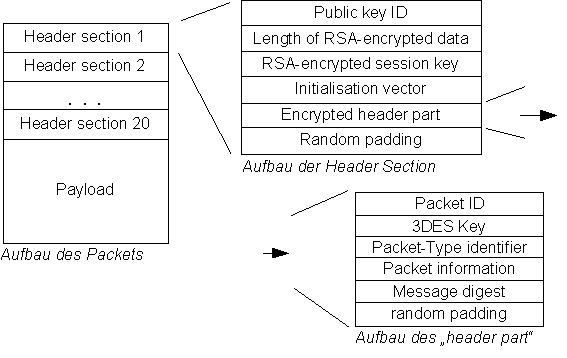 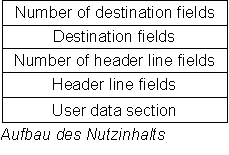 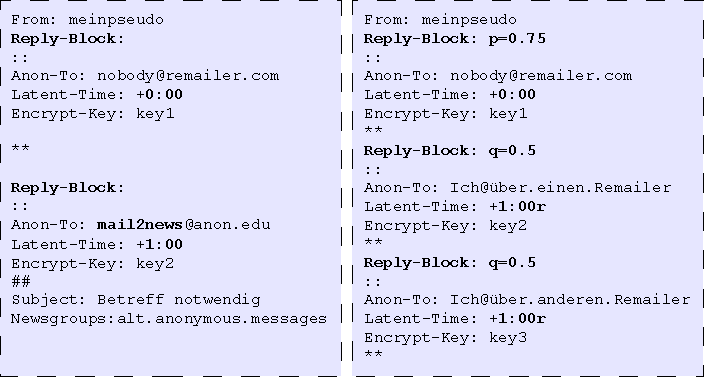 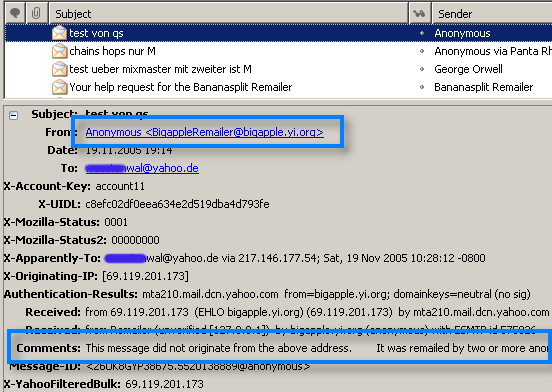 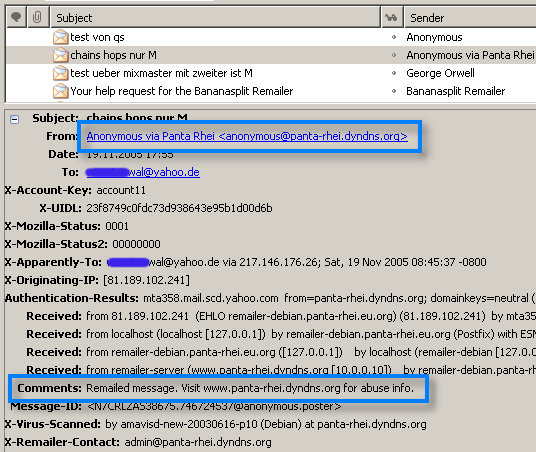 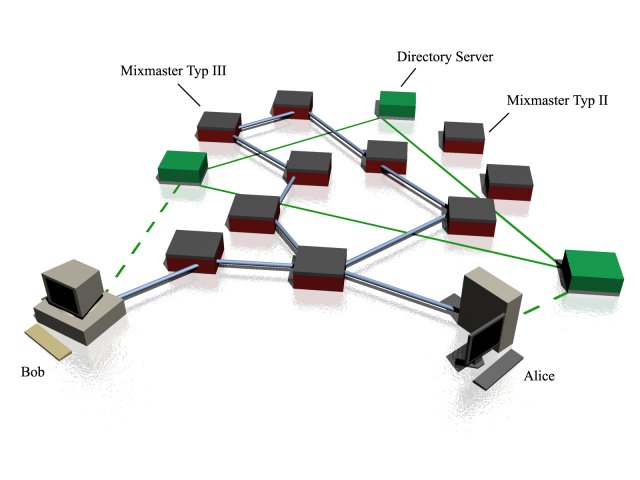 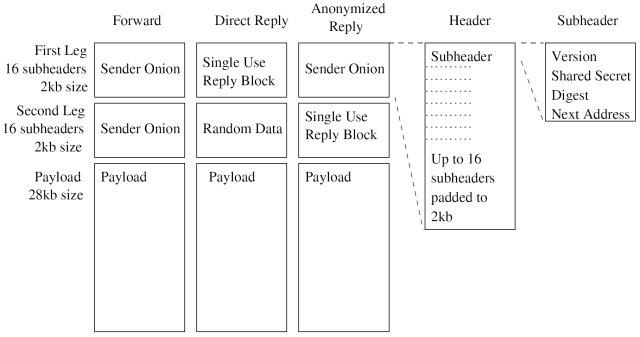