Biometry is the statistical analysis of biological observations and phenomena([1]). Biometry is coupled with the measurement of biometrics: measurable, physical characteristics or personal behavioral traits used to recognize the identity, or verify the claimed identity of a person.

In the context of Security Engineering there are traditionally two links between a person and her identity:

With biometry it should —in theory— be possible to establish a third link:

Therefore biometric systems can play an important role in authenticating a user.

Two different modes must be distinguished:

Identification
“Who is it?”
Authentication
“Is it her?”

Not all biometric systems can feasibly operate in both modes. For example if it takes a given system 1 second to authenticate a given user this would generally be deemed acceptable. If however the same system should be used to identify a user in a database of 10.000 users by simply trying the authentication on each database record in turn this would take 10.000 seconds or more than 2 hours and 46 minutes. In almost all but very few scenarios this will be completely unacceptable.

Being pattern recognition systems most biometric systems operate by first reducing the input (oftentimes an image) to a small set of features. Use of this set is twofold: 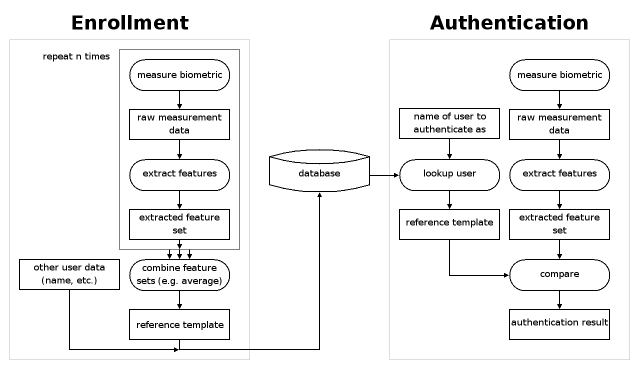 Quite naturally the first three only apply to authentication systems.

In most real world systems a high FAR is worse than a high FRR: When a legitimate user is rejected she simply tries again causing only a slight comfort loss. Accepting a illegitimate user, though, compromises the system and would usually lead to a loss of whatever the system was meant to protect.

As different environments have different requirements regarding the security of the system and the convenience of the users most systems have some sort of adjustment possibility, e.g. a threshold value for the number of matches features. This can usually be set to trade off a higher FAR in favor of a lower FRR or vice versa. To aid in comparison of biometric systems one then uses the equal error rate: The adjustment is set so that FRR=FAR which then gives the EER. The EER of different systems can then be compared. (In reality mostly no one would use a system configured this way, as detailed above.) 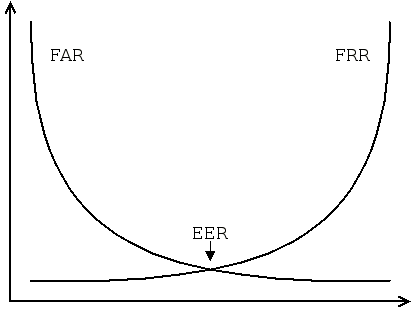 FRR and FAR curves and the point of EER.

A fundamental index in all systems that employ some sort of database of reference templates is the Failure to Enroll Rate, e.g. the rate of users that can't enroll into the system. In these systems a reference dataset must be aquired from each user prior to any operations (enrollment). This operation can fail, for example due to intrinsic properties of the person trying to enroll. E.g. it would be impossible to enroll into a system based on hand geometries for a person that has no hands. Similarly a mute person won't be able to enroll into a speech verification system, etc. And what use is a system with the best possible EER if two thirds of the prospective users can't enroll?

There are several parts of the human anatomy that are sufficiently unique and stable during a long time and therefore suited for use as biometric criteria. The most common are:

There are also some personal behaviors or similar habits that can be used as biometrics: